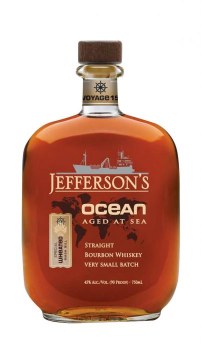 Jefferson’s Ocean Aged at Sea series was created as an experiment to see how much of an impact aging barrels on a ship would have on a bourbon. According to the company, “each voyage of Jefferson’s Ocean typically crosses the equator four times, visits five continents and over 30 ports on an average sailing.” The first Voyage release of Jefferson’s Ocean Aged at Sea was comprised of only three barrels. After 14 subsequent releases, one of which included a cask strength version, Voyage 15 is the first labeled as a “Special Wheated Mash Bill.”

NOSE
Noticeably light, this bourbon’s nose arrives on a whisper. Butterscotch and vanilla dominate with a slight burst of caramel and youthful oak on the tailend. Its sweetness is dominant despite its overall thinness. There are only generic bourbon flavors on display, which struggle to be memorable.

PALATE
A thin yet oily mouthfeel delivers big oak on first sip. Clove, pepper, grain, and burnt caramel join the fray, producing an interesting interplay of flavors. I can’t say I’ve had many bourbons that taste in the same wheelhouse as this one. Sure some may include similar flavors, but it’s the exchange of the flavors that make this particular palate unique causing me to take notice.

FINISH
Seasoned oak, allspice, wet cedar, dill, pecans, and fresh sourdough make up this peculiar finish. Slight heat and an almost phantom-like hint of cinnamon develops in the tailend. Like the palate, there is a lot going on in the finish, and while it doesn’t all blend together perfectly, it’s rather intriguing and makes me want to drink more.